Interview with Edu Suárez, author of the best goal of the year of beach soccer

Revenir
Beach Soccer
Interview with Edu Suárez, author of the best goal of the year of beach soccer
01.07.2019

He is training at Cambrils Park Sport Village and CE Futbol Salou with the Spanish national team. They are getting ready for the European Games of Minsk 2019 and we want to find out the key to his success.

You were awarded for the 2018 “Goal of the Year”. Did you expect that?

Winning the 2018 “Goal of the Year” award has been the most amazing experience. It is something that I will never forget. Just imagine with the amount of goals scored in a season and they choose yours!

On top of it, lots of people voted… I’m very happy, it is something I will never forget. Besides, I got lucky to share the award with Llorenç, awarded as the Best Player of the World in 2018. 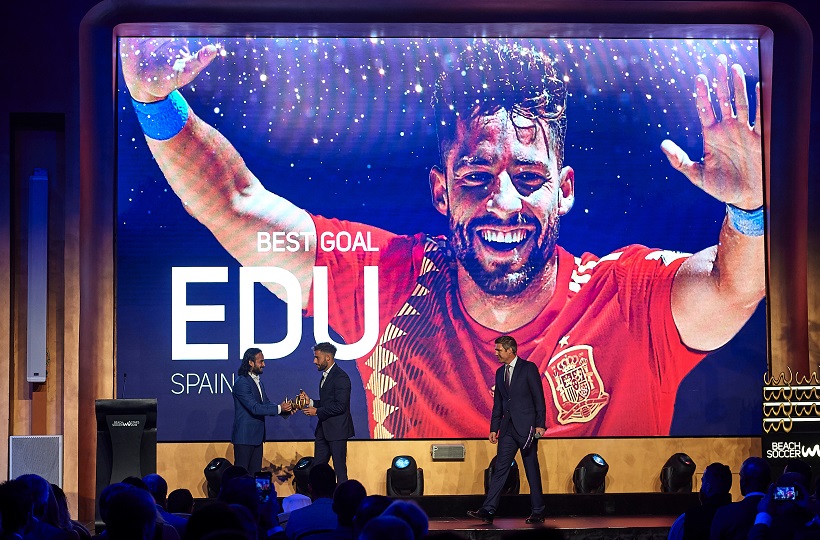 At a luxurious gala in Dubai, two guys from Torredembarra win the two most valued awards surrounded by Brazilian players, who are considered the best players in this sport…

We are proud of it, of course! It is something very difficult to achieve and I guess that over the years we will realise what we have done. Getting there is really complicated in both cases, for Llorenç, who won the “Best Player of the Year” award and for me with the “Best Goal of the Year”. So, we are truly happy and, thankful for the team, because without them it would have been impossible. 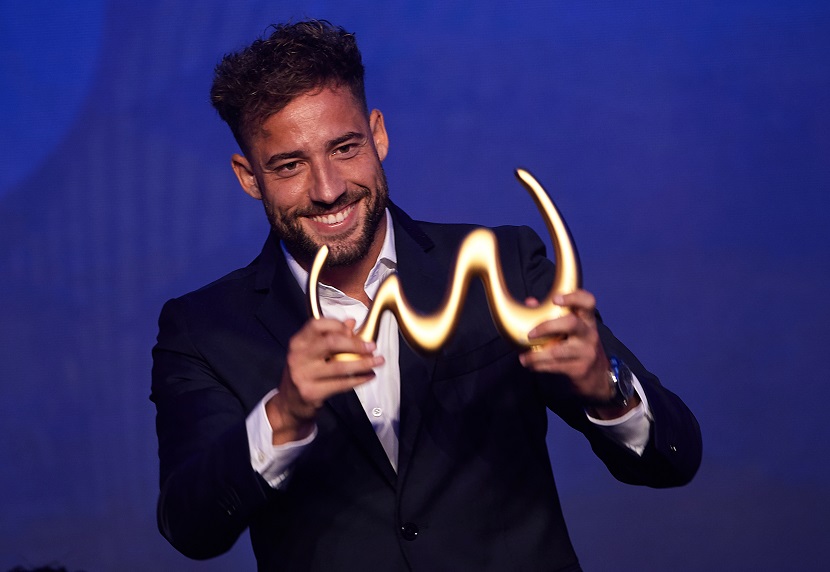 How and when did you start playing beach soccer?

I started playing beach soccer 5 years ago. I went to the beach to play with friends and Llorenç was there. He invited me to train with him, weeks passed by and I realized I liked it a lot. I played a first tournament with Catalonia, where Joaquín Alonso, the spanish national coach, saw me.

He liked the way I played and encouraged me to keep training because he might call me the following year. And it was exactly like he said; he called me to a first pre-match meeting and then I made my debut at a World Cup.

In 5 years, you have gone from playing to have fun to being at the top of this sport

In 4 or 5 years everything has rapidly risen. I didn’t expect it…. When I started playing, I couldn’t imagine that I would win the “Goal of the Year” award, play for the Spain national team, play in so many foreign leagues, etc. It was beyond imagination, but with hard work it’s been possible.

The boys from Torredembarra; Llorenç, Adrián, me … we have spent lots of hours training and in the end, all the efforts pay off. It is complicated to remain in the elite of a sport, but with hard work, we made it. 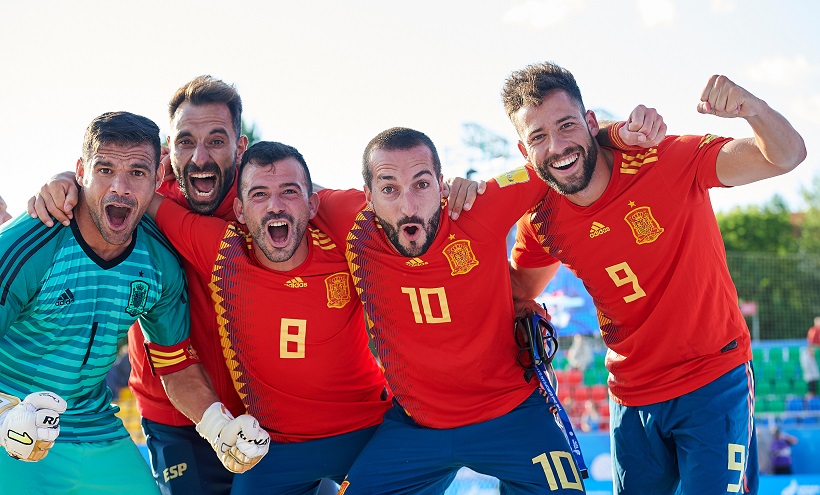 Besides playing with the national team, you play for UD Levante in the national beach soccer league. With them you have won the bronze at the Euro Winners Cup 2019. How do you feel about this outcome?

Playing with Levante and representing a Spanish team is something special for me. In Spain it is hard to be internationally known with beach soccer. There are stronger countries in terms of money, for that reason, reaching the third position at the Euro Winners Cup, which is the beach soccer version of the UEFA Champions League, has been very special to us. I am not saying that we expected to go this far but we had a great team, we were confident and ranking third position in Europe it is by no means easy.

You have also signed up for the Napoli Beach Soccer. Are you going to play in both leagues?

Playing beach soccer gives you the option to play for more than one team and league. If you can juggle dates, you can do what I do. I play with the UD Levante in the Spanish league and the Napoli Beach Soccer in the Italian league.

The hardest leagues in the world are the Russian and the Italian, so it is very important to be in one of them. All the top beach soccer players are in these two leagues. Besides, it is very difficult because only 3 foreigners can play in each team and you must fight to get into one of those teams.

Playing in so many competitions and teams, it is normal to think that you make a great living. Is it true?

Beach soccer is a minority sport. You can live off the beach soccer, but that means that one must play in lots of leagues, travel a lot… It is not like playing for FC Barcelona in 11-a-side football, for example, where you spend all the season. If you want to make a living as a beach soccer player, you must go from one league to another and fight a lot to be able to live on that year after year, but you can’t compare it, in no way, with 11-a-side football.

What do you think is the hardest in this sport?

The hardest in beach soccer is that it is a hard-physical sport. You ask anyone to walk or run on the sand and easily gets tired. So, imagine playing a game against other national teams for 36 minutes… it is physically exhausting.

I think that it is the most complicated in beach soccer, to get used to the sand. In addition, the ball doesn’t always bounce as expected like in football, it bounces anywhere. You must coordinate the game on the sand and the fatigue.

Are these difficulties what captivates you about beach soccer or is it another thing?

Beach soccer hooks you for different reasons. The first one is the weather, because we always play in places where it is hot. Then, unlike other sports, we play in stadiums where there is music and the atmosphere is great.

Beach soccer is not boring because there are lots of goals, it is spectacular, we do bicycle kicks… You don’t’ get bored because you must pay attention to the game, because there is a goal after another. It is a show quite different from others. 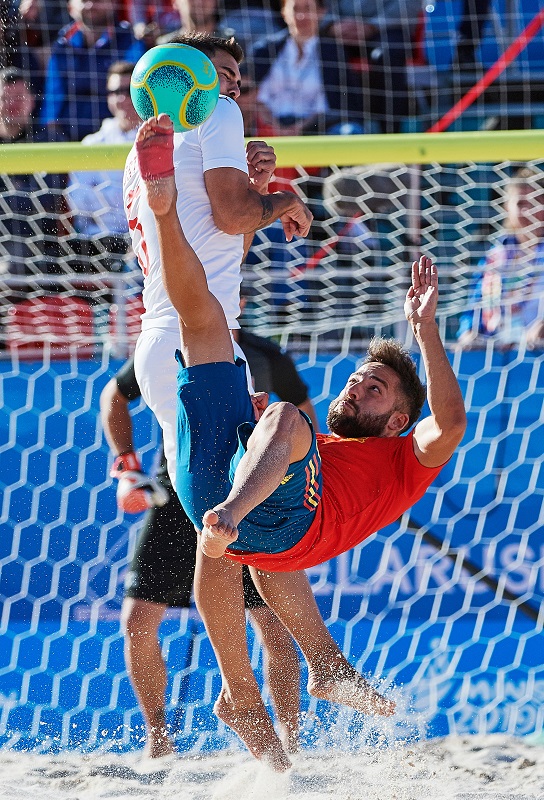 Over the 5 years you have been competing, have you noticed a growth in beach soccer?

Beach soccer is growing a lot, specially at an international level. For example, months ago we were in Moscow in a stadium for 14.000 people playing the Club World Cup (Mundialito), something we couldn’t have imagined years ago. People is betting on beach soccer.

Television is the one that gives visibility to a sport and, little by little, they are getting interested in beach soccer. At an international level, it is growing a lot and mostly it must grow at a national level, which is the most important and interesting for us.

Which is the highest goal that you want to achieve as a beach soccer player?

Do you think you have any chance?

This year the classification for the World Cup takes place and in December the World Cup is played in Paraguay. But first we must get a place in Moscow which is something complicated because there are five European national teams going there, but we will fight for it.

Once in the World Cup, the competition gets harder, because they are lots of exhausting days. Beach soccer is not like football where you have days off between games, here you play every day. But, anyways, I think that Spain has a great potential to win the Beach soccer World Cup. 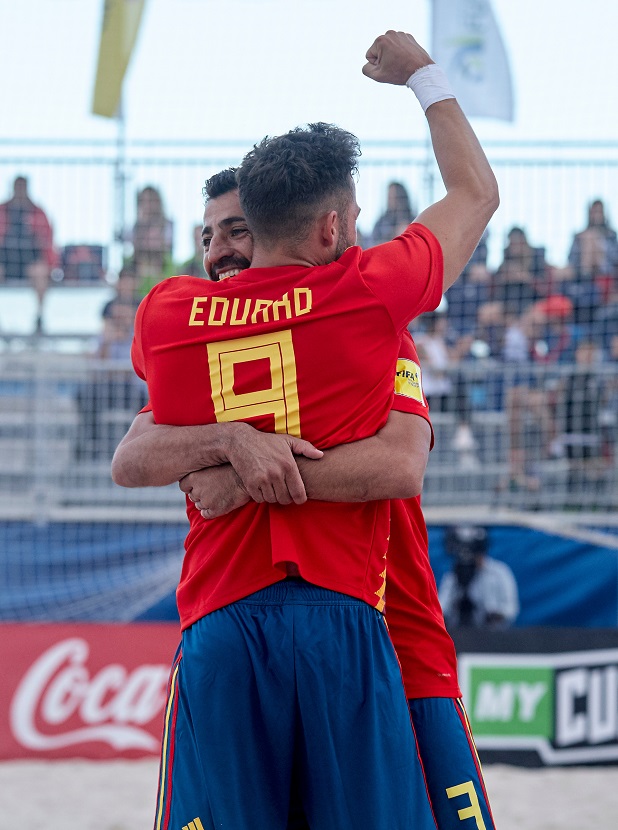 This summer you compete at the ANOC World beach games in Qatar where you will play against the best national teams lead by Brazil and Russia. Do you think you will do a great job?

We will play against the best national teams as if it was a World Cup. Once there I am pretty sure that we have the chance to go far. The team is confident. Last year we got to almost all the finals and this year we must follow the same path, because I think that we have options to win.

The Russia Nacional team plays close to the sand, whereas the Spain national team’s game is more aerial. Is a style better than the other?

At beach soccer, the way of playing is different from one national team to another. I would differentiate three different styles. First, the one played by Brazil which plays almost everything and does magic on the sand. They are really good because they play from an early age in Río, in Copacabana… and it’s part of them.

The second, the one played by Russians who are a global power and play close to the sand. They control the ball pretty well on the ground and do not control the aerial game so much. And the third would be our style and the one played by Portugal, which is more aerial. We try to play more up in the air because we think that the opponent must run more to steal us the ball. It is a style fight which is what makes beach soccer so interesting.

At beach soccer, the quality and quantity of sand is essential. What are their main characteristics, and which is your favourite?

At beach soccer the sand is one of the main factors. The main rule is that it should be, at least 40 cm deep. And to us this is the key. To me and my mates, the more sand the better. We play up in the air and lots of sand makes the rival get tired. On the other hand, if the amount of sand is little the opponent doesn’t’ get too tired.

To me, the best sand is the Torredembarra one, because it is deep, fine and one plays well there. At the Club World Cup in Russia we played on quartz sand and it was amazing, it was like levitating over the sand. Then, you can find better or worse sands, but there isn’t one specific to play.

What is your prediction for the European Games in Minsk?

I think that the team is confident about the outcome at the European Games in Minsk, bringing back an Olympic medal would be incredible for us, it is what we are looking for and one of the challenges we have for this year. I am convinced that our performance it will be outstanding.

We have a difficult group with Russia, Italy and Ukraine, but I think that they don’t like to see Spain in that group either, so we will be confident and try to get as far as possible. 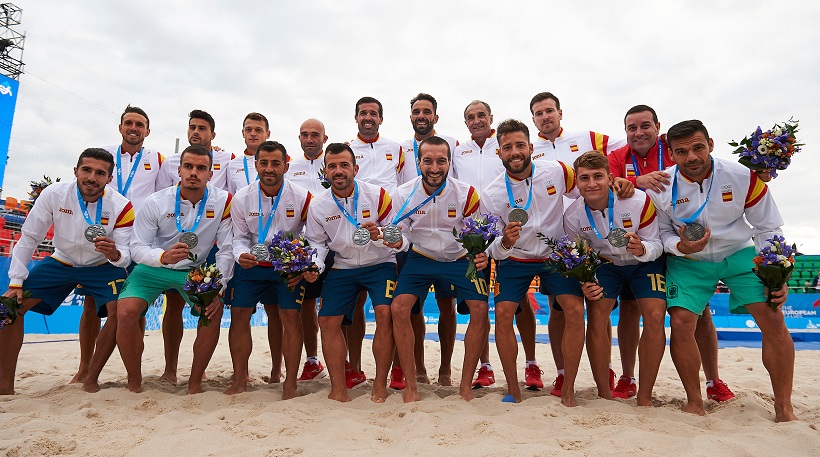 At the time of the interview, the European Games of Minsk had not taken place yet. Today, we congratulate Edu Suárez on his fantastic prognosis and the entire Spanish team for this silver medal.