Sergi Barjuan on his future in China: “They should put things better for me to continue there.”

Back
Football
Sergi Barjuan on his future in China: “They should put things better for me to continue there.”
28.02.2019

This year, Barjuan has chosen the facilities of Complex Esportiu Futbol Salou and Cambrils Park Sport Village for the preseason training of Zhejiang Greentown.  The weather, the quality of our pitches and the opportunity for the players to play against teams such as Barça B or Nàstic de Tarragona, have been the main reasons that have brought him to the Costa Daurada.

From player to manager: Is it an expected metamorphosis?

“When your professional career comes to an end, there are players who promptly want to become managers, but I wanted to slow down my life a little bit. I wanted to be with my family, see my kids grow….”

Understandable if we consider that, since he was 8 years old until he was 35, he never stopped playing football. And he adds: “But after the second or third year you start feeling inside something that tells you: you must do something else, you have to feel fulfilled again. And this is how the desire to be involved in football grew, knowing that a manager’s life can’t last too much depending on where you go, as it always depends on the results”

But what is needed to be a good professional football manager?

“Passion, I think that with this word I can define everything”. After his forcefulness, we can only quote Bernd Schuster “there is no need to say anything else”.

However, being a player and being a manager are completely different things. Sergi Barjuan admits that there are situations that he has only realized once he has become a coach, and puts it into context: “I also think that nowadays we give players too much information and I am not sure whether it is good or bad…” 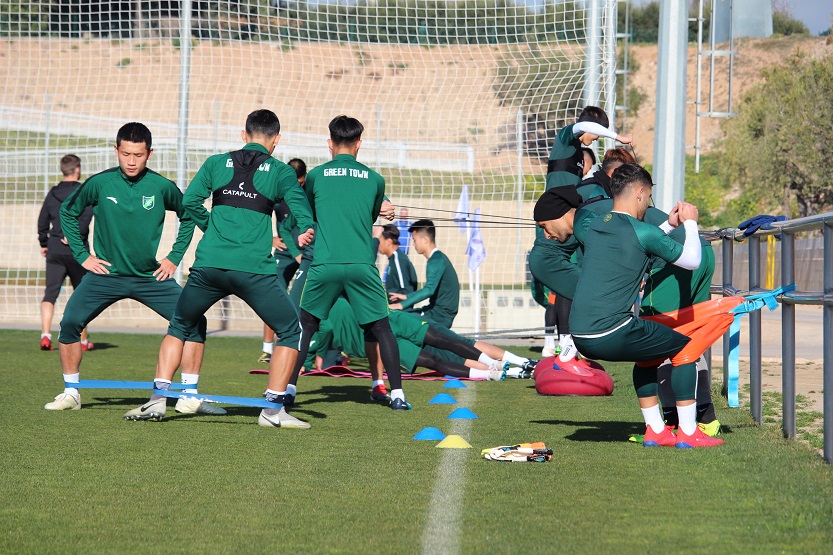 Not all retired footballers know how to adapt to the new reality and accept that their popularity decreases progressively. It is known that there are footballers that, once retired, they even have financial problems.

“In my case, when I decided to retire from being a footballer was because I was ready for the change and I wanted it. I think there are important guidelines. The first one is how your family has guided you from when you are a child to when you become famous. In this sense, I was taught to always keep my feet on the ground, to be coherent and to be as transparent as I was when nobody knew who I was. The second one is the friends you surround yourself with, or who you think are your friends who can convince you to do things or businesses, that you think are good but in the end are beneficial to them and not to you”.

[Video with the entire interview at the end of the post]

Culture clash is considerable. The way of understanding football and the way of thinking is completely different from the one we know in Europe.

“To them, the most important thing is to have significant foreigners, renowned players that make of the Chinese league a famous one, but they don’t look for a football basis starting from a young age, like us, to train them, to make them grow and trust in them. To some extend they have it…. but they haven’t worked on it. The training that young children have in Europe, they don’t have it there, and when they reach the top is because they are good, but there is a lack in previous training that you have to teach later when they are 18, 20 or 27 years and it is more difficult. The older they are, the more difficult.” 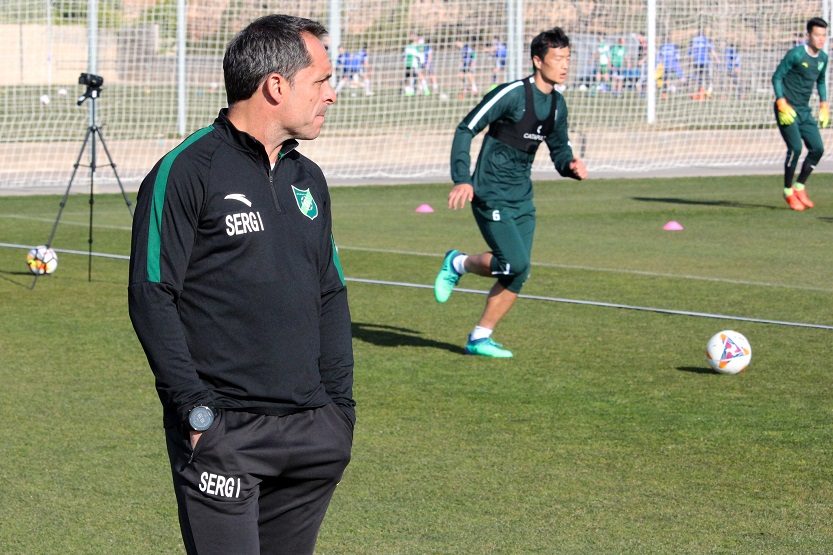 On the other hand, a translator is essential to make communication between the manager and the players easier. Both have to agree on what they want to say and how they want to say it, as cultural differences can play dirty tricks.

Raising one’s voice is something they don’t like. Is like if you were telling off a little kid, they just shut themselves in. They are things that I and we have to work on. We have to learn their culture and realize that, during a game or a training session one can shout at the group, but if you want to transmit a message individually, you have to do so out of that context or trying to do it calmly because otherwise, they will feel like you are reprimanding them, sort to say”

On 2015, China’s President, Xi Jinping, started a governmental plan to make football the national sport. The country’s aim is to become a football world power in 2050. But, is the plan of the Chinese Government realistic?

“They can do it if they start from the ground. If they don’t, it is impossible. They can be a world power because they are a lot of people and most likely they can get good player, but they have to understand that there is a base and that a player who is now 8 or 9 years old, in 11 or 12 years, will have to be ready to compete”, Barjuan concludes. 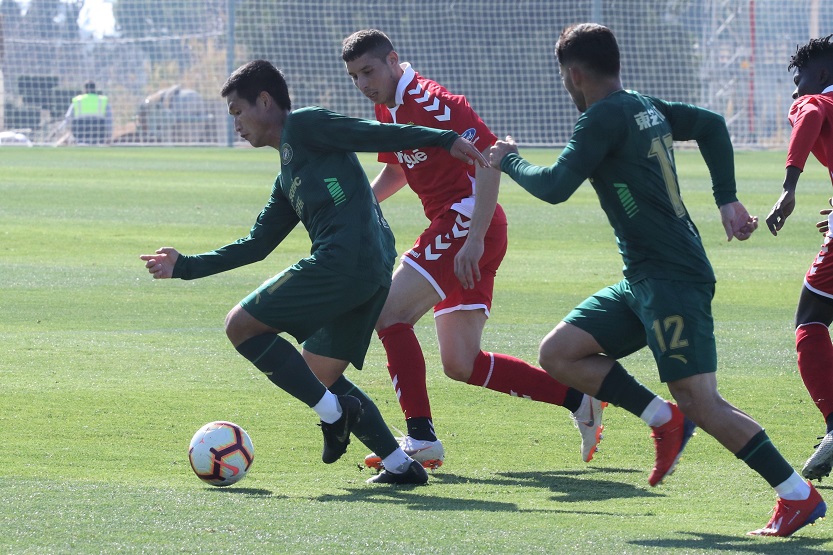 Zhejiang Greentown FC at only 2 points to be promoted

Last season, Zhejiang Greentown couldn’t promote to the Chinese First Division for only 2 points after some events considered as unlucky. Nobody expected the outcome, and the hard work of the Catalan manager and his team was noticeable. However, he is cautious:

“What we achieved last season, which nobody expected, was, first, make them think while playing football and later try to be more competitive. The negative part is that now they think that this season we will be the first, we will be promoted and that we will win everything. And I try to make them understand that this year is going to be even harder because they know us and know how we play.” 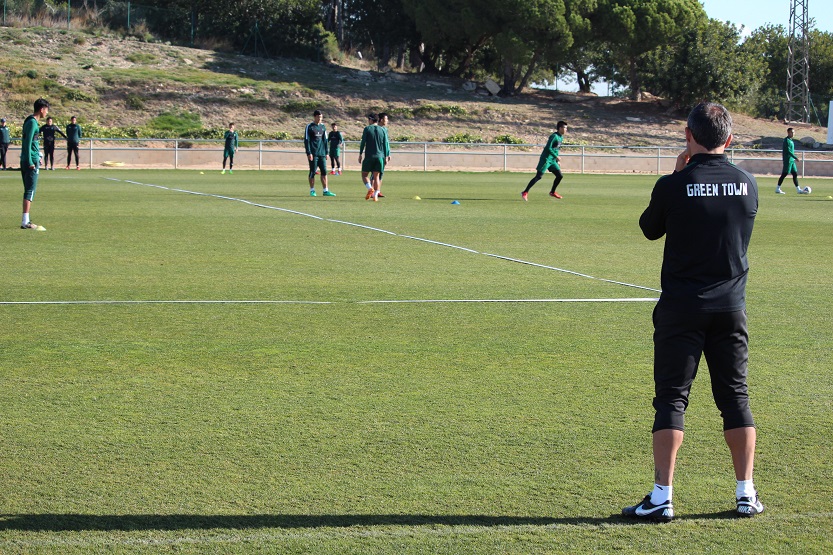 The methodology and way of playing that Barça are renowned, applauded and copied. What is the key to success? Sergi Barjuan is clear:

“Is a method that Johan Cryff implemented years ago, everybody has faith in it and has it clear the way of playing and the type of football player. Altogether makes that the model and all the new players that are signed have a way of playing and of working that adjusts to the parameters fixed 30 years ago”.

And he adds: “It is difficult that these models last long in a club, it can be because players from inferior categories are not strong enough to maintain the way of playing or because you change the manager and he doesn’t believe in the project…. Barça has been able to be a pyramidal club where this is the way of playing and, from there, all the pieces joint together, trying that keep all the pieces in its place to maintain a model that has been copied and is still being copied (…) But it will be difficult to do it the same way because, most of the times, clubs are too eager to achieve results in a short period of time. And Barça has been able to work on that perfectly. “

We couldn’t help to ask him about his friendship with other players from the same age like Pep Guardiola, Luís Enrique o Guillermo Amor. We want to know if they share advice and experiences.

“A good thing about current managers is that we do not have the fear of being copied. In the end your way of expressing or convincing players is unique. That is what you transmit and what one can see on the pitch”

In particular, about his friendship with Pep Guardiola, he tells us: “There are moments where I tell him things, less than he does, because the experience he has as the great player he has been, as the great manager he is and with the team he manages, where he can do more things than with teams where you continuously have to modify things ….. We share things, and basically are easy things we can talk about. The more intimate things that he has thought or worked, or that I have thought, well…. they are ours.” 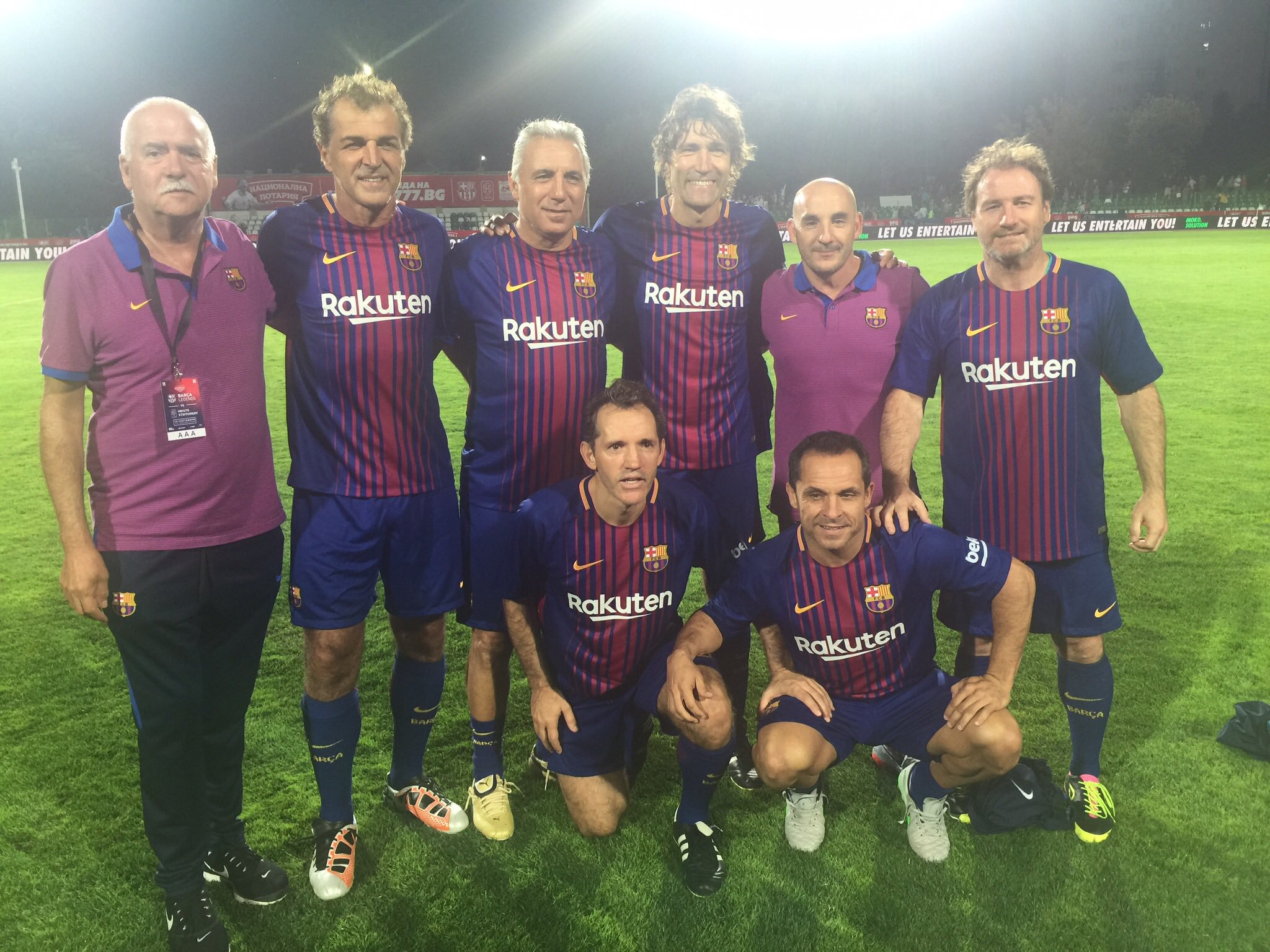 The dream to be Barça’s manager

“I think that to be Barça’s manager you have to be clear about your profile and towards where you want to go and, nowadays, my direction has shifted a little. I would have to adjust a lot of things, but illusion is something to always have and I think it will be nice to be able to help the Club that has brought you up. I also think that there are other managers more skilled to do it, which I understand and respect. I have made decisions that might have taken me away from that direction but, in the end, everyone has to make decisions based on what they look for, correct or not…. but…you never know, who knows.”

This is the last year of the contract of Sergi Barjuan with the Zhejiang Greentown FC, Next December Chinese season will come to an end and the Catalan manager already leaves the door open for other offers closer to home:

“We will see the options out there…. but, sincerely, they should put things better for me to continue there. I think that I have already lived the experience, I am ok, really good, but I have 4 children, I want to see them grow and to do so I need to be closer. Is not a matter of money, it is a matter of feeling good. There are moments when the culture shock makes me be nervous and uncomfortable when managing. That is a daily exhausting thing that if I can avoid…. Either I fix it, or the best is to not continue”, he states.